Results of a 2013 study published in the medical journal Spine demonstrated a dramatic correlation between patients referred to a physiatrist and a significant decrease in spinal surgery. 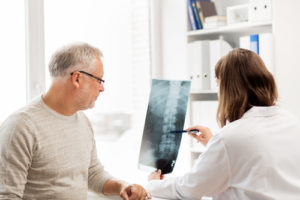 While spine surgery rates vary, efforts to curb excessive reliance on surgery versus alternate treatments have been spotty, according to the authors. As nonsurgical spine experts, the study posits that physiatrists often are effective in providing patients with a different perspective on treatment options.

The study, conducted in 2007, included the requirement by insurers that patients with non-urgent spine surgical consultations in a specific geographic region first had to consult with a physiatrist (who received extra compensation for the assessment).

Both surgical consultations and surgical rates results were then compared between 2006–07 and 2008–10. A survey of patients evaluated by physiatrists was subsequently performed to assess patient satisfaction and the results were telling.

The study concluded that physiatry referrals increased 70 percent while surgical referrals decreased 48 percent, and the total number of spine operations dropped 25 percent, with an incidental decrease in overall costs as an added benefit to both patient and insurer. (Although spinal fusion rates dropped, the percentage of fusion operations increased from 55 percent to 63 percent of all surgical procedures.)

Of 740 patients surveyed (a 48 percent response rate), 74 percent were “satisfied” or “very satisfied” with the physiatry consultation. However, only 40 percent of patients who underwent previous spine surgery were satisfied. Although surgical rates decreased at all regional hospitals and throughout all surgical groups, there were substantial shifts in market share.

The study concluded that a physiatrist consultation prior to surgical consultation resulted in decreased surgical rates and continued patient satisfaction across large segments of the public.

For more information on how a physiatrist can benefit your diagnosis and treatment options, contact the professionals at Michigan Spine and Pain at online or call (800) 586-7992 to schedule a consultation.