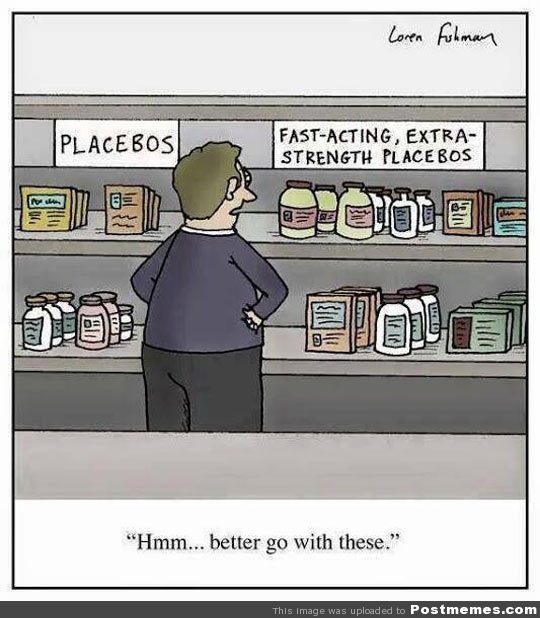 Have you ever heard of the placebo effect?

A placebo is a pill that has no medicinal value. It is essentially an “empty” medicine. A placebo is a substance that has no therapeutic effect, used as a control in testing new drugs. The placebo effect is that improvement in symptoms of medical research participants, despite their receiving only the placebo.

Jeffrey Mogil, who directs the pain-genetics lab at McGill University in Montreal conducted analyses of 84 American clinical drugs that were used to treat neuropathy. These drug trials’ results were published between 1990 and 2013.

Researchers are wondering why so many Americans receive nearly the same benefit from a placebo. It must be noted that the placebo effect in the US is significantly higher than other countries. Some possibilities include:

A recent article in The New York Times discusses the usage of the placebo effect to help pain patients.

So many drugs are addictive or have potentially harmful side effects. Could placebo usage be the answer?

Perhaps the act of receiving a placebo in a caring setting with a sympathetic health care professional delivering the placebo would be a good alternative for pain relief, one that causes no side effects and no dangers of addiction.

For those who wonder why anyone would consider taking a placebo, consider all of those women who utilize 28 day packs of birth control pills. The last seven days of the packet are placebo pills and the women are told that. But the makers and the women agree to take these sham pills, because the most important component of oral birth control methods is taking the pill daily without fail. For women who wish to prevent pregnancy, a daily fake pill that keeps her routine the same every day is worth the ruse.

“A Placebo Treatment for Pain”, published in The New York Times, January 10, 2016