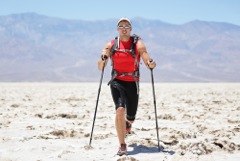 A recent study by the Association of Academic Physiatrists pegs recovery for Ultramarathon runners to take anywhere from five-to-seven days, post race. An ultramarathon, also called ultra distance, is any footrace longer than the traditional marathon length of 26.2 miles.

As Ultramarathons have grown in popularity, with some people participating in multiple races each year, the stress on the body can become intense. Ultramarathons typically take on tracks, roads and trails with terrains and environmental conditions that challenge even the most seasoned runners.

With the increase in the number of people running multiple ultramarathons each year, combined with the physical stress each race places on a runner’s body, it has made understanding the factors that enhance recovery, that much more important. Researchers studied 72 participants in the 2015 Western States Endurance Run — a 100-mile trail race through the Sierra Nevada mountains of Northern California where runners climb 18,000 feet and descend 23,000 feet.

The team established each participant’s baseline function with two separate runs in the 21 days prior to the race, and repeated these baseline tests at days three and five after the race.

The researchers also assessed subjective measures by participant’s lower body muscle pain — on a scale of zero (no pain) to 10 (unbearable pain) — and fatigue at race registration, immediately after the race, and each morning for the seven days immediately following the race.

Finally, at completion of the race, the researchers collected blood samples from participants to determine plasma creatine kinase concentrations of each runner; this measurement helps determine muscle damage.

While assessing the outcomes of these tests, the researchers also took into account other factors that might affect a person’s recovery. “Ultramarathons are challenging runs, and we expected a number of factors to affect recovery,” says Chin.

Instead of the typical 24-to-72 hours it takes to recover from exercise-associated muscle pain and soreness, researchers discovered that participants required an average of five days to recover.

“This study sheds light on the factors that impact a person’s physical and functional recovery from running an ultramarathon,” the researchers concluded. “As athletes continue to push the boundaries of strength and endurance, it becomes more important to study the effects of these activities as well as measures that could aid in recovery.”