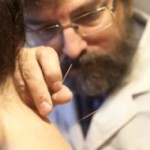 A new study will seek to determine whether access to acupuncture as a pain management tool for chronic pain could help prevent patients from becoming addicted to opioids.

The state of Vermont is seeking to answer that question by funding a study to see if making acupuncture accessibly to Medicaid patients could be useful in treating chronic pain, as a way to avoid or reduce reliance on opioid medicines and is both feasible — and useful.

Since acupuncture is increasingly considered a viable option for pain relief, Vermont legislators have made clear that they want to explore how it could impact the lives of others — particularly those living below the poverty line.

Robert Davis, a neuroscience professor at the University of Vermont Larner School of Medicine, is running the study. During the three-month study, different acupuncturists in three different Vermont cities will offer free sessions to qualifying Medicaid patients with chronic pain.

Davis acknowledged in an interview with Vermont’s National Public Radio that people who often seek out acupuncture are those who can afford it, but he says it often doesn’t mesh with the larger trend toward including non-pharmaceutical options for treating pain and other illnesses.

“For example, the Joint Commission, which is a nonprofit organization that credentials hospitals and health organizations, they made it clear that you can’t just rely on pharmacologic treatments for pain,” Davis said in the radio interview. “You should also consider non-pharmacologic treatments, and they specifically mentioned things like acupuncture, massage, mindfulness.”

While not without controversy, there is growing evidence that acupuncture can be effective for some types of pain relief. In 2010, 93 percent of deaths from opioids in Vermont involved overdosing on prescription medicine, according to the state’s Department of Health. That percent has since decreased as use of heroine has risen. But misuse of prescription opioids continues to be a problem. Addiction issues stemming from prescription medicines are still a significant part of the opioid epidemic.

The Legislature-funded study is looking to see if acupuncture could provide an alternative, or a complement, to prescription opioids. It isn’t evaluating the science of acupuncture; there won’t be any comparing its effectiveness to a placebo — and there’s already evidence it can provide pain relief.

Instead, the research project is set up to see just how feasible it would be for Medicaid patients to use acupuncture. And what impact it might make on their lives.

“One of the things that we’ll learn from this study is: Will these people utilize acupuncture if offered?” Davis asked in the interview.

The study will also measure if people’s pain was reduced, and will look at a whole range of health measures, from the ability to do daily activities to the patient’s psychological status to whether his or her use of painkillers decreases.

The study is even measuring how acupuncture might impact the patient’s use of other health services.

“In other words, we’re interested to see: Did it affect the amount of times that people went to the emergency room? Did it affect how often they went to doctor, or filled prescriptions, or things like that?” Davis asked.

If early indications hold any weight, there’s certainly interest in acupuncture among people suffering chronic pain. The trial just began soliciting volunteers a few weeks ago, and already 75 people have been processed and enrolled, according to Vermont NPR.

The study will continue through April 2017 and the results will be submitted to the Vermont legislature later this spring.